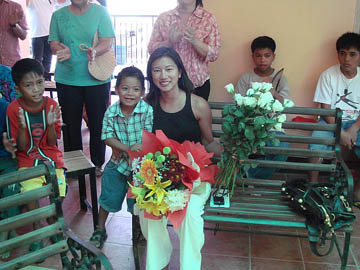 The JDVSF’s pilot project, the expansion of the St. Martin de Porres home street children in the Philippines, sprang from one family’s ideals of service and wrenching tragedy. Launched in 2005, by Lizelle Salvador, a first generation Filipino American, the JDVSF mission was a direct response to a pressing need she saw first hand during family visits to her parents’ homeland. “When we traveled to the Philippines, my brothers and sisters and I would ask them about the children we saw begging everywhere in Manila,” recalls Salvador. “’Where are their parents?’ we used to ask our mom and dad. We were shocked and saddened to learn that many of them were abandoned or worse yet, forced by their parents to beg so that the family could eat.”

The circumstances under which a parent could abandon or exploit a child were incomprehensible to Salvador and her siblings. The youngest daughter of a doctor and nurse who lived and worked on Long Island, Salvador was raised like the children of many educated Filipino comfortable, and secure in the notion that with the support of loving parents theirs was a future filled with possibility and achievement. Still, the memory of the harsh reality children less fortunate faced in the country where much of her family still lived haunted her. The medical supplies her father regularly sent back to the Philippines with the Jesuit priest who visited them every year also kept their plight front and center as did the sobering thought that in life there were no guarantees. “I was just lucky to have been born to parents who could care for me,” says Salvador. “If my parents had come from different backgrounds my life could have been quite different.”

Tragically Salvador’s life—and that of her parents, two sisters, and brother—did take a deeply sorrowful, unforeseen turn on February 20, 1983. Returning home from school one day, her eldest brother, John, lost his life to a drunk driver. A beloved and devoted son, brother and friend, John, just 14, left behind a family and countless friends devastated by his loss and the bright future he was denied.

His memory, however, and the light that he brought into so many people’s lives still shines brightly today in the hearts of all who knew him—and even in the hearts of those who didn’t. John’s memory and his determination to wring the most out of each and every day is a great inspiration to Salvador, who founded the JDVSF with him very much in mind: “Since John did not have the opportunity to develop his full potential and make a difference in the lives of others, we formed the JDVSF to give at-risk children that opportunity, in his memory.”